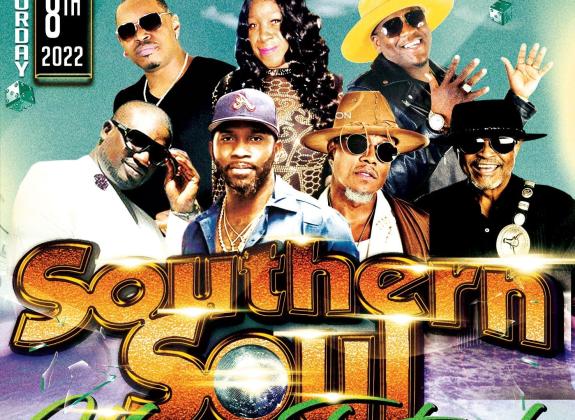 Experience all your favorite soulful hits and top songs at the Southern Soul Music Festival! The artists performing LIVE are:

Tucka: Influenced by R&B and Soul Greats he rose-up on the sounds from his southwest Louisiana roots. TUCKA has come up with his own sound, which combines the best of both.

Calvin Richardson: Dubbed the Prince of Soul, multi Grammy award nominated singer, songwriter Calvin Richardson has been delighting fans with his no holds barred Southern soul for decades.  USA today declares Richardson is “influenced by vintage R&B and his gritty vocals set him apart from his smoother contemporaries, fresh vibes from a singer who respects and values his roots."

Sir Charles Jones: is an artist whose part-throwback, part-modern style of R&B is based on traditional Southern soul and blues. The vocalist, songwriter, producer, and multi instrumentalist calls himself the Undisputed King of Southern Soul.

Theodis Ealey: Blues singer, guitarist, and bandleader Theodis Ealey has earned his nickname as "The Bluesman Lover." Ealey first made his name working with some of the best names in the blues, but he's also won a following for his R&B tunes.

Karen Wolfe: Karen began her professional musical career as a member of the gospel group Soul Unlimited, but she made her name as a Southern blues-soul singer through a series of albums in the 2000s and 2010s.

FatDaddy: This upcoming Blues & Southern soul artist uses music as a powerful means of storytelling. You'll love what he has to sing!